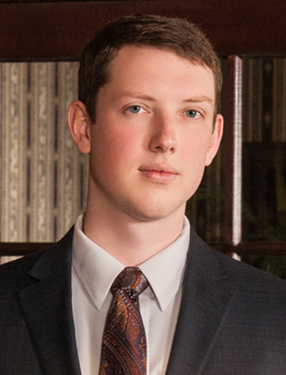 We are closed for 2 weeks in response to the Coronavirus concerns. Contact us via email: sethslayden@mtselaw.com

Seth concentrates his practice on business and commercial law, real estate transactions, corporate formation and governance, employment law, mergers and acquisitions, and litigation related to the same. Seth also assists the firm’s clients with trust and estate planning and disputes.

While Seth has only been practicing law since 2015, he has already gained extensive experience handling complex mergers, acquisitions, and sales. Within the past three years he has drafted, assisted, and closed transactions for the firm’s clients totaling over $100 million. He also represents a number of corporate clients in the St. Joseph and surrounding areas, and is responsible for ensuring their day-to-day legal needs are met, which can range from ensuring HIPAA compliance for health organizations to drafting seed contracts for farmers.

Seth received his Bachelor of Science degree in Political Science from Northwest Missouri State University in 2012. He attended law school at the University of Missouri-Kansas City, graduating in 2015. He was on the Dean’s List every semester.

Seth is the author of Drake v. Filko, 46 Urb. Law. 187 (2013), a Case Note that examined handgun permit requirements in New Jersey. Upon graduation, Seth was inducted into the Order of Barristers, a national honor society that recognizes less than ten percent of law students who excel in oral advocacy and brief writing skills.

Since graduation, Seth has authored or supplemented three chapters for The Missouri Bar Deskbooks. The Missouri Bar Deskbooks are publications that cover virtually every type of Missouri law and are purchased by Missouri attorneys to provide guidance in a particular area of the law. Seth’s research and writing may be found in Missouri Tort Law, Fourth Edition, Chapter 2 – Assault and Battery, with the assistance of another member of the firm, Ken Siemens. Seth’s writing also appears in Missouri Family Law, Seventh Edition, Chapter 19 – Discovery, and Chapter 20 – Trial Practice, with Michael Taylor, a trial lawyer in the firm.

Seth learned to appreciate and respect the value of hard work growing up while working on the family farm in the country outside his rural northwest Missouri hometown of King City. While studying political science in preparation for law school, he decided to widen his cultural perspective by volunteering in South Africa. Seth has now been to South Africa (and other countries in southern Africa) twice in the past five years and treasures the life-long friendships he has made there and in other parts of the world.

When he is not working or planning his next trip overseas, Seth enjoys helping on the family farm, playing a variety of different sports, or volunteering in the community. He also dedicates time serving on boards of various nonprofits in the St. Joseph area.